Hacked client Nodus for Minecraft 1.5.2 - legendary hack on the old version, which began the era of unfair play. Nodus is small enough, but for the time of that version it was the best, as it was the only full-fledged hacked clients with a whole set of functions, and not some one. Decorated he of course awful, since at the time the design was the fact that little worried about people. Then it was important only to use functions to always be the best.

Appearance:
A small GUI menu opens on Y. it has a radar, coordinates, an overview of the functions that are included, as well as the sections themselves with functions. Near them, by the way, it is written how much they all have functions in a particular section. 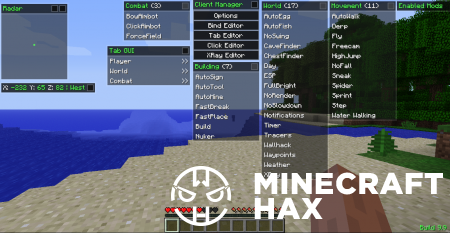 How to install Hacked client Nodus for Minecraft 1.5.2:
1. Download and unzip the archive using WinRar or Zip;
2. If you have Minecraft open, you need to close it;
3. Click start, type %appdata%/in the search bar.minecraft/versions;
4. If you do not have such a folder, it must be created;
5. Replace the file .jar in versions folder 1.5.2;
6. Log in to Minecraft, in the settings, select a profile called minecraft 1.5.2;
7. Save it and then log in under this profile
Download hacked client Nodus for Minecraft 1.5.2
Download nodus_1_5_2.zip
[4.85 Mb] (Downloads: 667)